the enchanted isles are A volcanic archipelago in the eastern Pacific Ocean 600 miles west of the Ecuadorian mainland whose hostile environments provide homes to a resilient host of species. 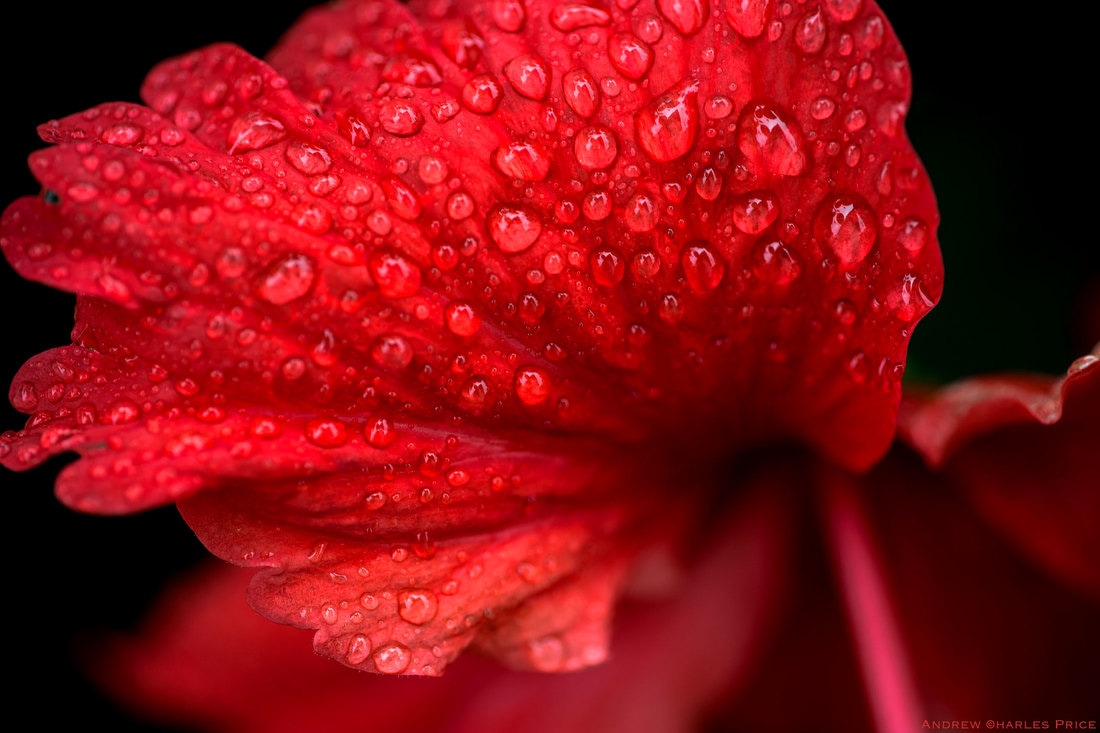 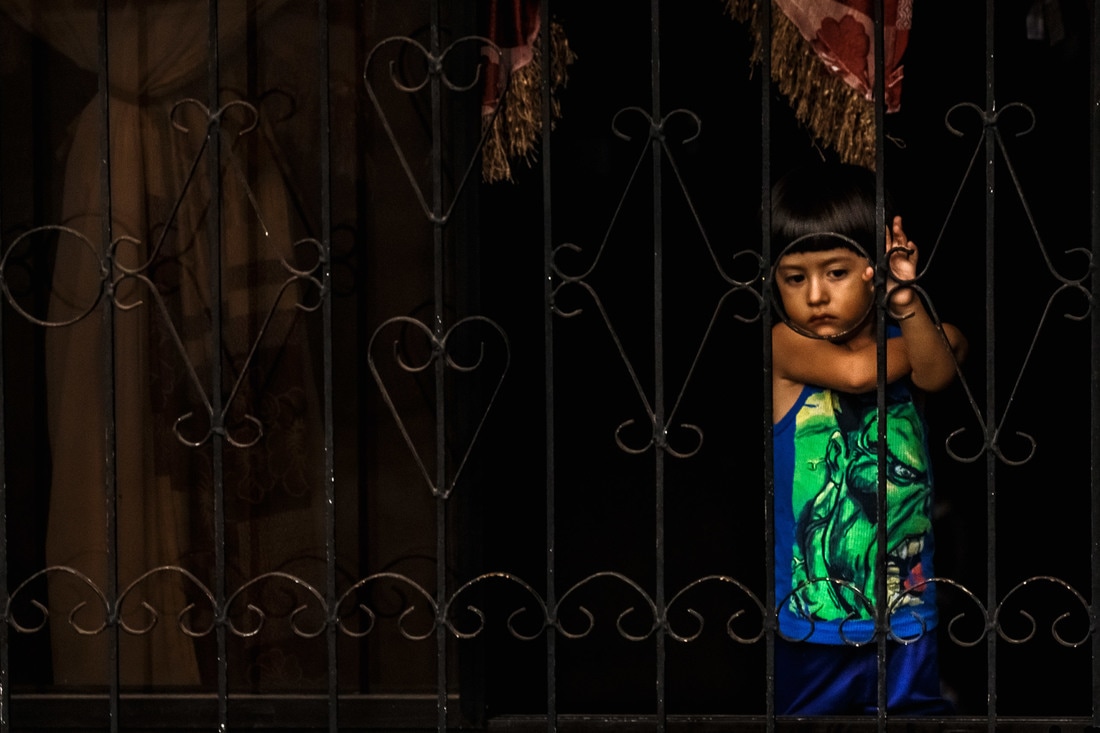 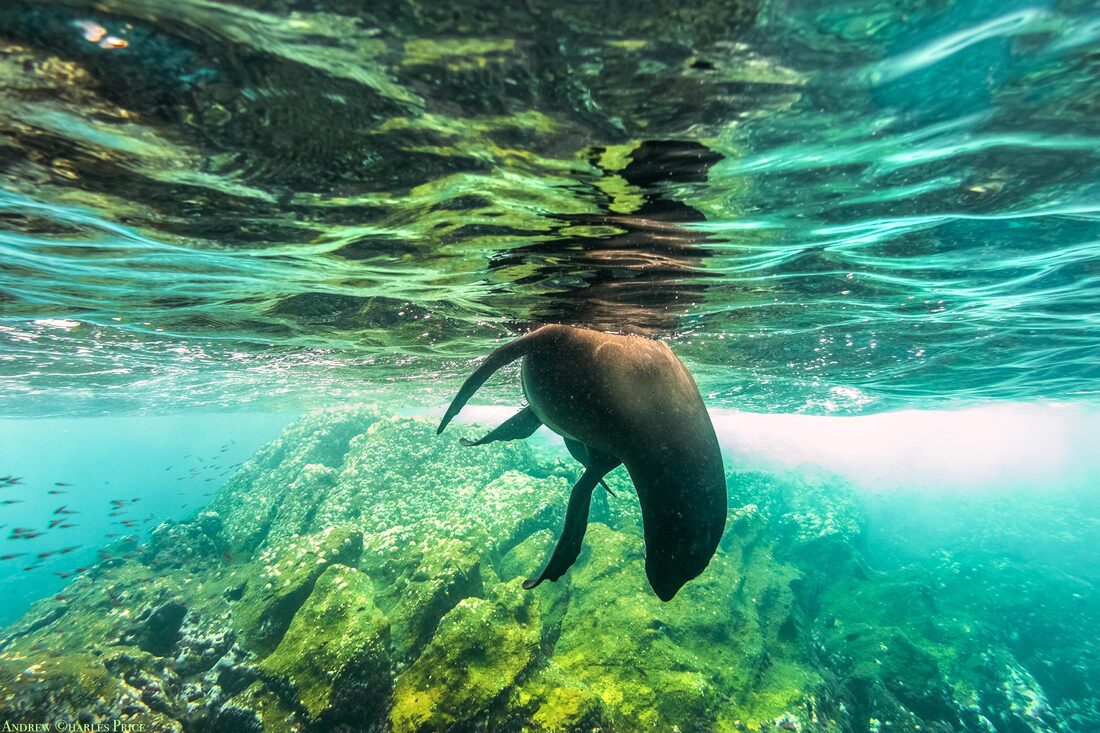 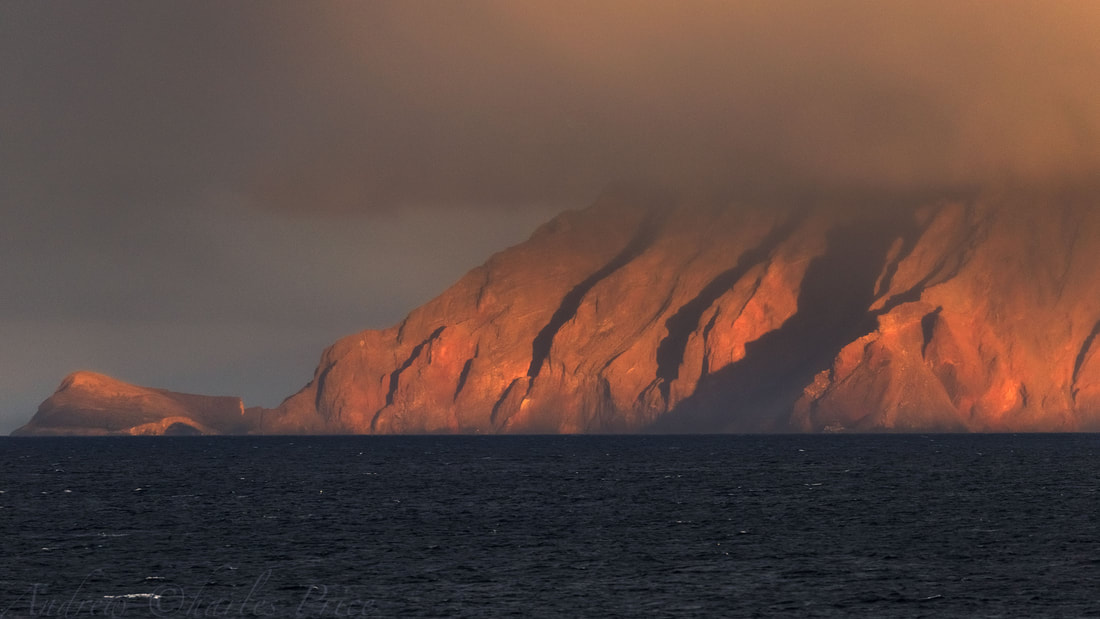 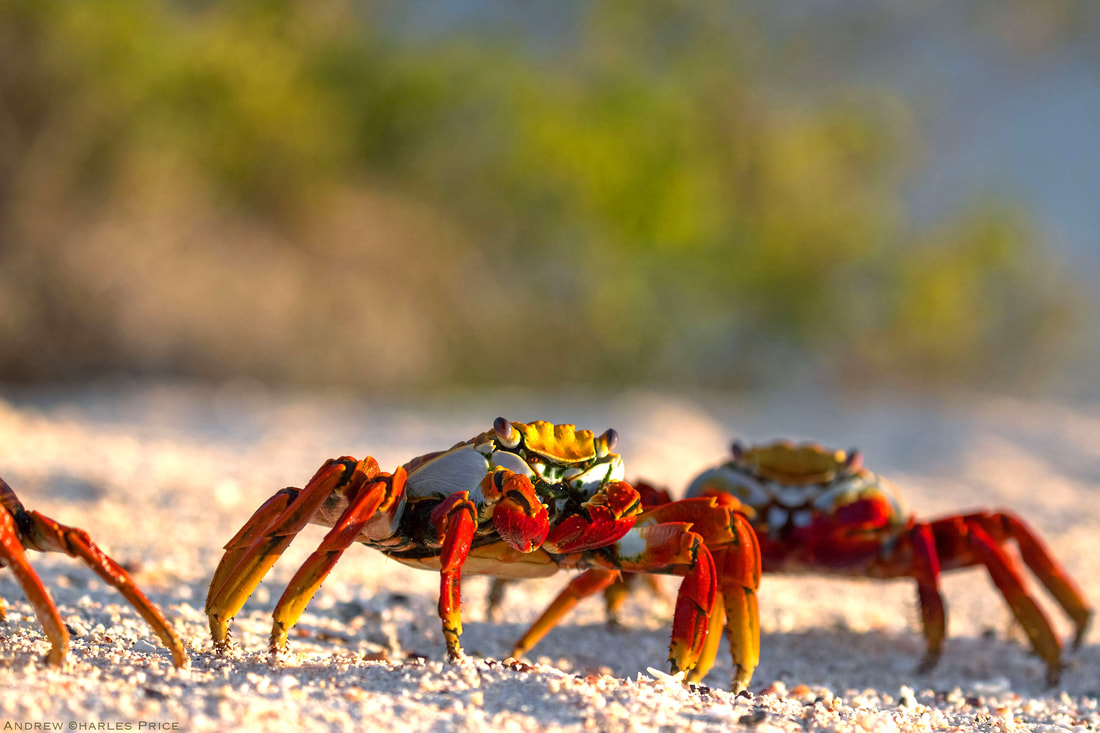 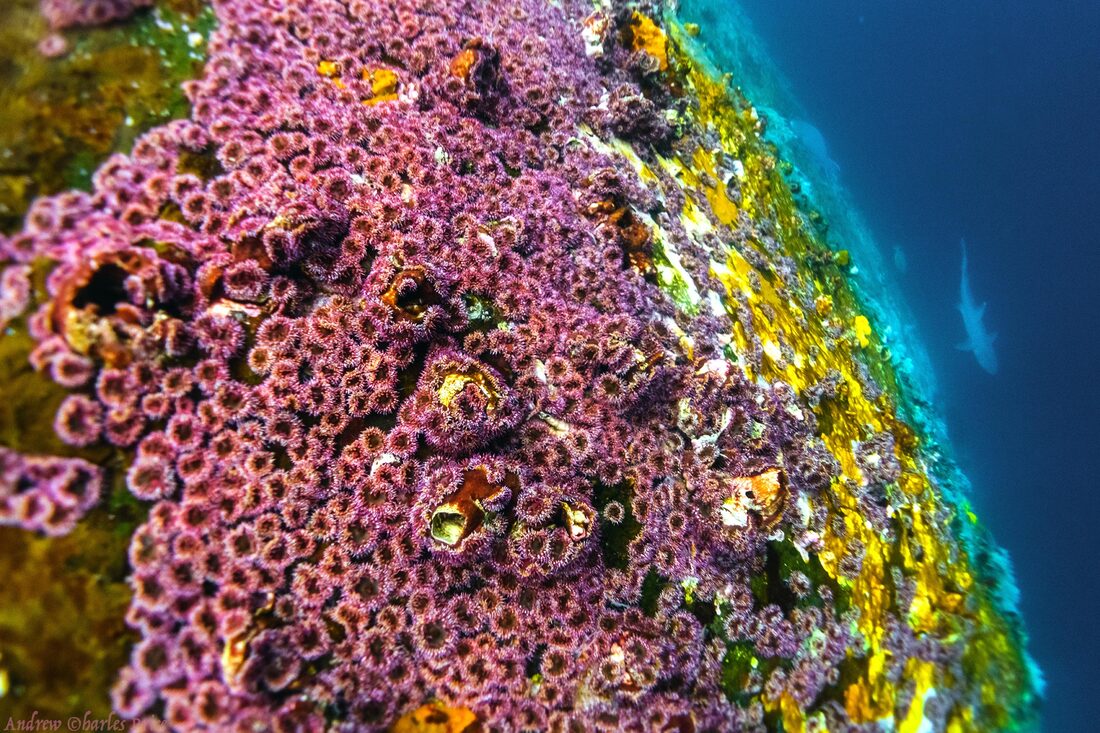 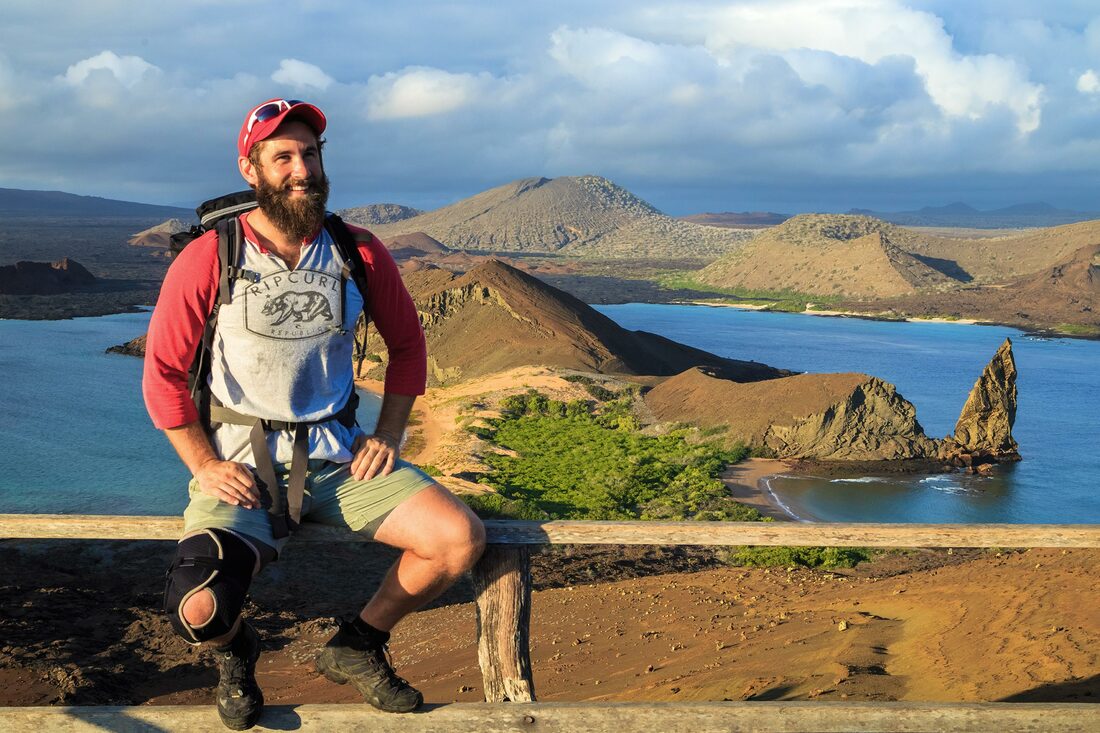 Somehow, through blessing and luck, the soles of my feet have felt the blistering heat of Galapagos' sun-baked volcanic soils as well as the cooling aid of her azure waters on two separate journeys. The image above was composed on the summit of Isla Bartolome in 2015, while the picture below depicts me searching for adventure during a Puerto Ayoran dawn in 2006.

At the ripe age of three I had been nicknamed Wild Man Price by those in charge of my care because I was perpetually engaged in some form of exploratory motion. Blink and I'd disappear into a coat closet searching for Narnia. Turn around  for a split second and mall security would definitely be bringing me back in an hour or two. Where would I have been? In a candy or toy store, logically? Maybe a dressing room hideout? No. I was outside, roaming deep in the parking lot. Then I got older and nothing changed except for the canvas upon which I wandered. Water, air, and adventure merged into one involuntary necessity for my existence. So I have rambled on.
"Got no time to for spreadin' roots, the time has come to be gone.
And to' our health we drank a thousand times, it's time to ramble on."
In the last days of May 2006 I first witnessed cerulean waters pounding their might upon the porous basalt boulder fields of Isla Santa Cruz. It was an ancient graveyard of lava, a serrated jet-black coastline littered with militias of the most colorful crabs the world has likely ever seen. The basalt ended where the sand began, and the sand ended where the forests of Opuntia cactus sprouted from the thirsty earth. And there in the keeping of the cacti were the brackish lagoons where flamingos fervently foraged for their carotenoid rich diet in an audible and nearly rhythmic water-filtering foray. My senses could not have been more bewildered by the Galapagoan landscape and her charming creatures. I knew I was still a little whacked-out from a well earned night of wild fun in Quito, but was I actually watching two lizards have a push-up contest against each other directly in front of a massive Marine Iguana mash-pile? And I'm talking about forty miniature wingless dragons in a warmth-preserving heap who all have the same biological requirement to emit excess salt through their nostrils with a display of flatulence-mimicking snotrocketry - both humorous and disgusting. 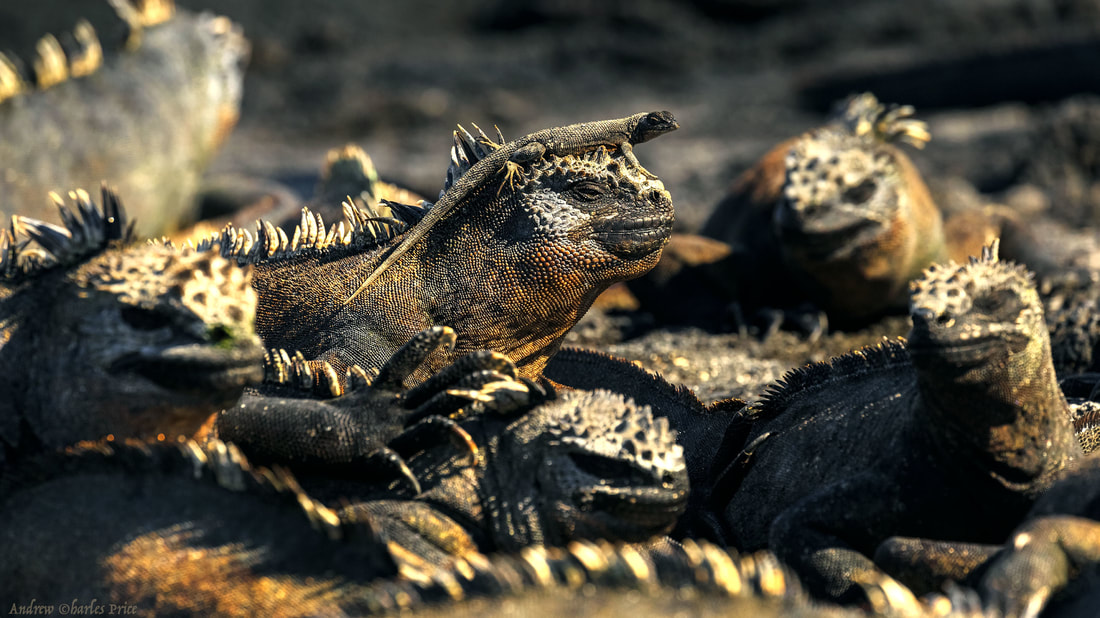 Similar to my earlier observations of Galapagos in May 2006, these three pictures from December 2015 portray Galapagos life in its most classic fashion. The bottom image displays the chromatic brilliance of both sea and Sally-Lightfoot Crab as the crown of Volcan La Cumbre rests in the distance. In the middle, a Galapagos Greater Flamingo laps it bill through the water hundreds of times per minute in a metabolic quest for algae and crustaceans. Finally, on top, an infamous mound of heat-sharing Marine Iguana beasts afford a prominence for a highly territorial Lava Lizard.
While my 20 year old wildly energetic brain was bound to the duties of collegiate academia I had an opportunity to pursue ecological field investigations in Ecuador for a short and sweet duration of three weeks. I had previously heard brief whispers of Galapagos in classrooms where the name Darwin was mentioned, complete with touristic visions of Giant Tortoises and hungry buccaneers, but I didn't have a real clue about Galapagos' alluring peculiarity. Population studies courses inspired in their roots by Darwin's very own On The Origin Of Species had rewarded me a full and well understanding of the evolutionary merits of adaptation and natural selection, but until that virgin exodus to Galapagos my imagination fell short of the gripping Galapagoan reality - of the stark contrast between pristine waters and xeric lavascapes, between the thin line of life and death.

Survival Of The Fittest

Almost a decade later I returned to Galapagos in November 2015 for a photographic journey made possible by the vision of a wonderful woman and the can-do attitude of her fearless husband. As the stories goes I sold a piece of artwork to this couple that had traveled through the French Alps exactly two months after I had visited there on an impromptu photoadventure. Now the sale of artwork isn't nearly as impersonal as going to the store and retrieving a product, for a bond is forged amidst the sharing of overlapping trails and connecting stories that arise from the art. I was afforded the chance to share dinner with these customers and in the exchange of much progressive discussion they became sold on me. They desired to support what I stood for, what I aimed to achieve, and who I had hoped to become.
Then a few weeks later as I finished installing the large piece depicting mountain flowers and jagged peaks in their home I was unexpectedly gifted a wrapped box and a card. And it was given with genuine excitement. The contents of the card amiably bestowed an action-producing desire to support my progress as a photographer. Words I still hold dear. The contents of the box, however, were those very words animated with life - documents detailing my next encounter with the legendary Galapagos islands. Besides overflowing gratitude, what do you say to somebody who gives you a gift of such magnitude, as if the world was placed in my palms? Unfortunately, I was not able to shower that wonderful woman with my thanks as she abruptly passed away weeks before I was set to embark.

This mature 293 foot German fishing vessel reclaimed by National Geographic was my home on the sea for two weeks. Named the Endeavor, it also served as a staging point for isolated explorations - made daily on land and under the water in a pursuit to intimately observe life in Galapagos. Immediately beneath the stern of the ship, a Zodiac, a French-designed personal transfer craft, shuttles patrons and crew between the Endeavor and landing sites.
A vital piece of legislative knowledge any visitor to Archipielego de Colon must know is that 97% of the total islands’ mass is government-owned national park land. The other 3% of Galapagos terrain is populated in sordid pockets, namely in the towns of Puerto Ayora, Santa Cruz, and Puerto Baquerizo Moreno, San Cristobal. No man or woman may, however, populate any part of del Parque Nacional Galapagos between 0600 & 1800 hours - and as also formally mandated by the country of Ecuador, no woman or man may set foot upon the protected Galapagos lands without the guidance of an official Naturalista. So I introduce you to our guides, Aura Bandru & Juan Carlos Avila!

Aura Bandru, a naturalista in Galapagos, explains the elementary factors enabling island creation and population - volcanic eruptions lead to foundational land mass - which gathers seeds dispersed by wind and water. Seeds sprout into sustainable vegetation that beckons the highly adaptive habitation of advanced organisms - whom first had to swim, fly, or float. Follow?  Whether she is beneath the helm of Galapagos' most active volcano as seen above, or she is scouring sea turtle feeding grounds well below the surface, Aura is both a commanding guide and a graceful creature of Galapagos.

The Tale Of Juan Carlos

Everybody say hello to Juan Carlos, I guarantee he will greet you
with the warmest reception. Hooolaaaa, Juan Carlooooos!
Pictured above in 2015, below in 2006.

That long lost May, many many moons ago, a man named Juan Carlos Avila was stuck like a bullseye-stricken arrow in my life for six days, and he is without exception, tied-for-first the most notable person I have ever met in my travels. I bonded well with Juan Carlos when I met him on the Galapagos portion of my Ecuadorian ecological investigation. He was no ordinary naturalist and had a penchant for adventure and merriment that I admired. Brimming with the knowledge of everything you could possibly desire to know about faunal and floral populations in the Galapagos, Juan Carlos never missed a beat. During the day he was a pin-point professional and at night he became a legendary character of calm, cool, charisma. One evening over a decade ago he took myself and a pal out for a few pilseners and an eye-opening dose of culture - which truly has a fantastic tale better spoken than written.
I’ll simply state that when the taxi we were riding in with Juan Carlos cruised way beyond the limits of town and into the damp darkness of muddy, unpaved highland roads, I began to hold inquiry with the fact that Juan Carlos never really told us where we were going. I've been in unpleasant situations in other countries where one begins to question the safety of his life, and this started to smell like mutiny. But before my overly dramatic Navy Seal wannabe attitude could make any decisions, we had arrived somewhere and we were strangely not unsafe - and that was not the last time I would ever see Juan Carlos Avila.
Ten years later I climb aboard a ship in the Pacific and I see a face I cannot nor will ever forget. It is the legend himself, and I can hardly believe that an influential stranger from a world away would grace my life twice. When I reminded Juan Carlos of who I was he became wide-eyed and leaned over to his naturalista buddy, remarked in a little Spanish, and erupted with welcoming laughter. It was more than good to be back under the guidance of Juan Carlos Avila.

The Traveler's record
a photographic archive of life in galapagos

Tap or click a picture and teleport to the world of...

map of the galapagos islands

Refer here at any point in the story
to garner your best imaginations
of the Enchanted Isles.

© 2018 AndrewCharlesPrice.com
all artwork is copyright registered